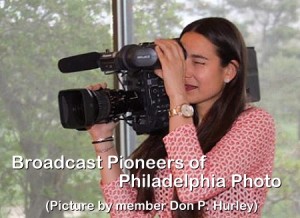 Congratulations to Emmia Newman, a documentary storymaking student from Muhlenberg College, who was recently awarded a Broadcast Pioneers of Philadelphia Scholarship for her outstanding work in documentary filmmaking. The scholarship will support Emmia as she finishes production on a documentary, “The True Ingredients of My Mother’s Indian Cooking.” Emmia began this project in Prof. Andy Smith’s DOC 150 in Fall 2016 and has further developed it this semester in Docs in Progress with Prof. Aggie Ebrahimi Bazaz. She describes the film as “an intersectional investigation into the post-colonial British-Indian Identity, looking specifically at themes of confinement and gender politics. As a British-Indian woman, I have been invested in unpacking my history as both the oppressor and the oppressed throughout my college career, and I hope that this film will eventually be in conversation with that work.”  Emmia will share this work at the Docs in Progress presentation on Tuesday, May 9, 6:30 p.m., in Trumbower 130, on the campus of Muhlenberg College.

Emmia was also honored by Muhlenberg College as this year’s recipient of the Susan Halamay Award, in recognition of her outstanding achievement in nonfiction media making.  Nominated by the faculty of the Department of Media and Communication, Emmia received the award at Honors Convocation on Sunday, April 30, 2017.